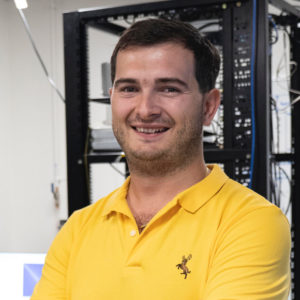 Lossless linear wave propagation is symmetric in time, a principle which can be used to create time reversed waves. Such waves are special “pre-scattered” spatiotemporal fields, which propagate through a complex medium as if observing a scattering process in reverse, entering the medium as a complicated spatiotemporal field and arriving after propagation as a desired target field, such as a spatiotemporal focus. Time reversed waves have previously been demonstrated for relatively low frequency phenomena such as acoustics, water waves and microwaves. Many attempts have been made to extend these techniques into optics. However, the much higher frequencies of optics make for very different requirements, as most of the detectors cannot allow for a direct measurement of an optical wave properties in the temporal domain. A fully time reversed wave is a volumetric field with arbitrary amplitude, phase and polarisation at every point in space and time. The creation of such fields has not previously been possible in optics. We demonstrate time reversed optical waves with a device capable of independently controlling all of light’s classical degrees of freedom simultaneously. Such a class of ultrafast wavefront shaper is capable of generating a sequence of arbitrary 2D spatial/polarisation wavefronts at a bandwidth limited rate of 4.4 THz. This ability to manipulate the full field of an optical beam could be used to control both linear and nonlinear optical phenomena.

Dr Mickael Mounaix is an Australian Research Council Discovery Early Career Researcher Award (ARC DECRA) Research Fellow at the University of Queensland in Brisbane, Australia. He has research interest in the field of light manipulation in complex materials such as multimode optical fibers or multiple scattering media. He completed his PhD in 2017 in the group of Prof Sylvain Gigan at Sorbonne University, where he investigated how to control ultrashort pulses of light in scattering media. In 2018, he joined Dr Joel Carpenter’s group at the University of Queensland to study the shaping of light in multimode optical fibers. In 2021, he was awarded an ARC DECRA fellowship to investigate to further develop the simultaneous shaping of all the properties of light (spatial, temporal/spectral and polarization) within a single device.