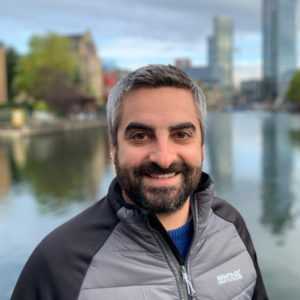 Giorgio Volpe is a Lecturer in the Physical Chemistry Section at University College London (UCL). He has held this position at UCL since 2014. Relying on forefront photonics and fabrication methods, his current research interests focus on the experimental and numerical study of far-from-equilibrium behaviors emerging in active soft matter systems that are of either biological or artificial origin, such as motile bacteria or artificial microswimmers respectively. In 2012, he was awarded a Ph.D. degree in Photonics from ICFO – The Institute of Photonic Sciences (Barcelona, Spain) for his work on the optical control of nanoantennas undertaken in the group of Prof. Romain Quidant. After his Ph.D. studies, he held a two-year junior position at the Langevin Institute, ESPCI within Prof Sylvain Gigan’s group (Paris, France). Giorgio’s research focus shifted to light scattering in complex media and its applications to nanophotonics, optical trapping and imaging through opaque materials such as biological tissue.