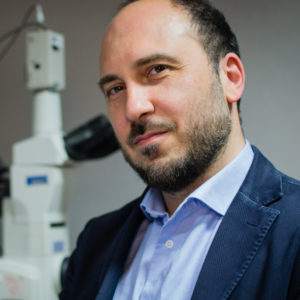 Roberto Di Leonardo is full professor at the Physics Department of Sapienza University in Rome, where he teaches Thermodynamics and Biophysics. He is interested in the origins, consequences and applications of motion at the micrometer scale, from Brownian motion to cell motility. To study this, his lab builds digital microscopes that integrate optical and computer hardware and where light can be used for imaging, fabrication and control of microsystems composed of synthetic and biological units. Di Leonardo has a PhD in Physics from the University of L’Aquila where he worked on supercooled liquids and the glass transition. In 2002 he moved to Rome to join the Soft Matter Research Center of the National Research Council. Starting in 2005, as a researcher at the University of Glasgow, he became interested in the use of light’s momentum as a tool for manipulating matter at the micrometer scale. In 2009, he began studying flagellar propulsion, focusing in particular on the possibility of exploiting motile bacteria as a source of work in miniaturized devices. He has authored more than 100 research articles on topics ranging from experimental optics to statistical and fluid mechanics. He has received a Presidential Medal in Italy (Premio Le Scienze 2007) and is an ERC grantee (Starting Grant 2012, Proof of Concept Grant 2017, Advanced Grant 2018).